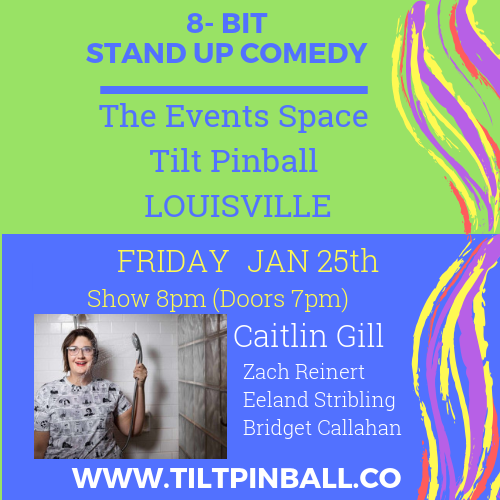 Join us for our monthly stand up comedy at the Events Space at Tilt Pinball. Headliner Caitlin Gill and guests will keep you laughing all evening. The doors and bar open at 7pm with first come first on best seating. The show will begin at 8pm. Our comedy shows are 21+ events. Other Guests include Zach Reinert, Eeland Stribling & Bridget Callahan

Caitlin's stand up has been featured on the Viceland show Flophouse. She has performed at the Oddball Comedy Tour, the Outside Lands Festival, SF Sketchfest, Bridgetown Comedy Festival and in some of the best comedy clubs in the nation. Her writing has been feature in Bobcat Goldthwait's Misfits & Monsters coming to TruTv, Hidden America with Jonah Ray, the series Take My Wife and in The New York Times. She named one of TimeOut LA's 2018 Comics to Watch, and was voted Best Comedian in the East Bay Express “Best Of” Edition in 2013. You can hear her on podcasts like 2 Dope Queens, The Cracked Podcast, Put Your Hands Together, Competitive Erotic Fan Fiction and NPR's Snap Judgement.


Zach Reinert is a comedian out of Denver, CO. He is a regular at Comedy Works and has performed on several festivals around the country. You can also see his written work in the Denver magazine Suspect Press and he has been named Funny Person of The Week by Brightest Young Things.


Eeland Stribling is a fresh comic from Denver CO. He started stand-up comedy in 2018 while finishing is bachelors. He's opened for Jay Larson and Josh Blue, and will be travelling to different festivals this year. Eeland loves his dog, fishing and making people laugh.