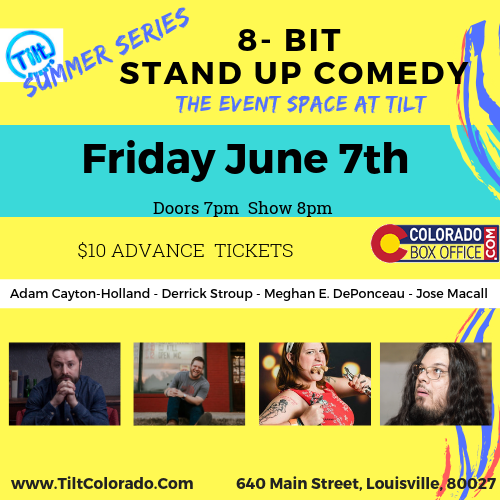 Adam Cayton-Holland is a national touring headliner who was named one of 25 “Comics to Watch” by Esquire magazine and one of “10 Comics to Watch” by Variety. Along with his co-horts in the The Grawlix comedy troupe, Adam created, writes and stars in truTV’s “Those Who Can’t,” in which Adam plays Spanish teacher and bon vivant Loren Payton.

He has appeared on CONAN, The Late Late Show with James Corden, The Meltdown with Jonah and Kumail, Happy Endings, Deadbeat, Flophouse, Hidden America and @midnight. He has also been featured on WTF with Marc Maron, Nerdist, Comedy Bang Bang and Sklarbro County podcasts. Cayton-Holland has performed at the Montreal Just For Laughs, SXSW, and Bridgetown Comedy festivals, and helms his own comedy extravaganza in Denver, the High Plains Comedy Festival. He has also performed at The Kennedy Center and Carnegie Hall.

Adam has three albums, “I Don’t Know If I Happy,” “Backyards,” and “Adam Cayton-Holland Performs His Signature Bits,” all available on iTunes, and his first book, Tragedy Plus Time, was published by Touchstone Books in 2018. Adam lives with his wife Katie, his son Malcolm, and a purebred Chesapeake Retriever named Annabel Lee. He once threw out the opening pitch at a Colorado Rockies game and people have described him as “genial,” and “with decent teeth.”

Alabama native and stand-up comedian Derrick Stroup is not your average slow-talking Southerner. With the cadence of a pissed-off auctioneer, he locks people in with his detailed stories and over the top energy. Derrick tours the South regularly and loves a Waffle House that's clean and cares about its customers.

Meghan E. DePonceau is both a professional giggle maker & hooch slinger, with blood made of Frank’s Red Hot Sauce. DePonceau left behind her previous career, as a ruthless bookie in Buffalo, NY to pursue her passion in the defensive dark arts of stand up comedy, in Denver, CO. Currently she the host/producer of unCORKED! & Charlie Foxtrot and "Chief of Butts" at 5280Comedy.com. Her writing has been published by Funny or Die, Suspect Press, Barf Magazine and her storytelling has been featured on RISK! & Narrators podcasts. Meghan regularly performs at Helium Comedy Club & Comedy Works, known inventor of “Taco Pasta”, while also performing at High Plains Comedy Festival, Crom Comedy Festival, Savage Henry Comedy Festival, Beast Village Comedy Festival, Altercation Comedy Festival and on the Loosen the Bible Belt tour. DePonceau is fluent in three dead languages, two of which she killed with her bare hands.

Jose Macall is a joke-hawker from Denver, Colorado. His penchant for offbeat joke writing has allowed him to successfully infiltrate the High Plains Comedy Festival, Project Pabst, The Denver Improv, Comedy Works as well as every dive, hideaway, nook and cranny with a stage to raid. He has worked with acts such as Adam Cayton-Holland, Ben Kronberg and Rory Scovel. He is definitely not a spy.