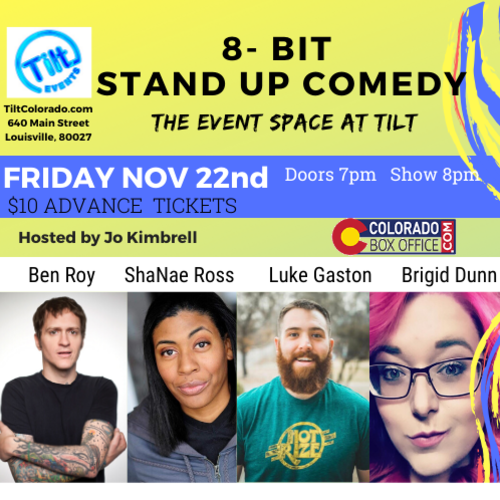 Join us November 22nd for our sell out stand up comedy show at Tilt.

Here's who we have in store this month:

Taking comedy audiences by storm since 2004, Ben Roy brings an unparalleled energy and unique voice to stage. Often compared to Lewis Black or Bill Hicks due to his passionate, ranting approach, Roy has a style that is definitively his own. Ben just signed a new album deal with 800 Pound Gorilla Records and they are recording his new album live at Comedy Works.

Roy cut his comedic teeth in Denver at Comedy Works. Since then, he has been selected to perform at the Montreal Just for Laughs Comedy Festival, LA Riot Comedy Festival, Boston Comedy Festival, Austin’s South by Southwest festival, and many more. Roy has been featured on HBO's Funny as Hell series; in the John Wenzel book Mock Stars: Indie Comedy and Dangerously Funny (alongside comedy greats like Patton Oswalt and Fred Armisen); as well as on the Comedy Central shows Adam DeVine's House Party and This Is Not Happening. Ben has also released three stand-up comedy albums.

Along with fellow Denver Comedians Adam Cayton-Holland and Andrew Orvedahl (who collectively perform as The Grawlix), Ben created, writes and stars in TruTV’s original comedy series Those Who Can’t, which ran for three seasons. In addition to stand-up comedy, Roy is a prolific musician, currently the lead singer of SPELLS.

ShaNae Ross is just goofy for no reason! Native of Oklahoma has been in a relationship with comedy since 2006 and doesnt plan on divorcing anytime soon. She is a a finalist in this year’s Comedy Works New Faces Contest.

Luke Gaston is a Colorado comic using the hell out of his art degree. Being a big fan of the marijuana and working odd jobs from everything from radio DJ to fake doctor, he has an inherently silly perspective. Luke was a featured performer in the 2018 Toronto Cannabis Comedy Festival and a semi-finalist in the 2018 Comedy Works New Faces Competition. Luke also hosts and produces a comedy showcase at Scrumpy’s Hard Cider Bar every last Friday in Fort Collins. Luke lives in Fort Collins with his girlfriend, dog, and 2006 Subaru (Non Turbo) Impreza.

Brigid is a Denver based comedian who got her start in Fort Collins in 2014. You can now find her at venues across the state, including her show Big Girl Pants at Factotum Brewing the first Thursday of every month, or on social media @PrettyGEEKY91.