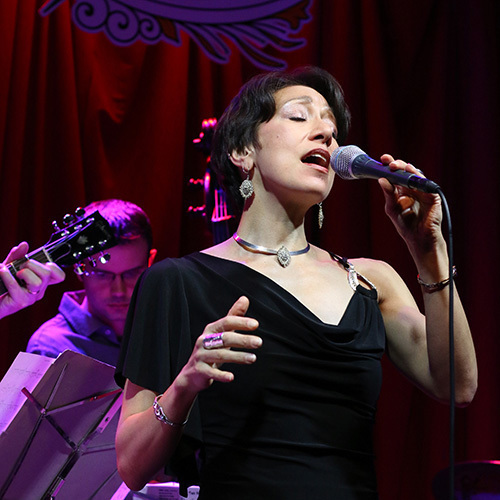 “Medina offers the jazz listener a musical journey that takes the foundation of Latin and Jazz idioms and successfully redefines the experience with thought provoking lyrics and vocal abilities far beyond the norm. Medina uses her voice as an instrument and storyteller, and invites the listener to delve into the corners of their mind with lyrics that reflect life and human conditions...” -Constance Tucker, All About Vocals

"A jazz artist whose compositions encompass the musical ethos of many different cultures… A Voice seductive, delicate, resonate, and crystalline – a major humanist who happens to communicate through singing." (5 stars) -Grady Harp, Amazon

Born into a family of singers, Jocelyn determined her identity as a musician at the tender age of five through choirs and piano lessons. She later pursued opera work at Stanford University, earned a Bachelors from Berklee College of Music, and a Masters in Vocal Jazz Performance from Manhattan School of Music.

Between her formal studies, Jocelyn spent 4 years living and performing in Madrid, Spain, where she recorded her first full-length CD of original compositions, "The Journey Begun." Further musical explorations brought Jocelyn to Ghana, West Africa, as well as to Salvador, Brazil. In 2005 she returned to the United States to pursue her Masters studies, and in 2011 released her second album of original work, "We Are Water," combining her jazz and Latin heritage with the rhythms and flavors of African and Brazilian music. Her most recent travels brought Jocelyn to Mumbai, India, where she was exposed to new vocal and instrumental aesthetics, elements that resonate throughout the material on her third album “Common Ground,” released in 2017, blending jazz with the world music styles of India and Africa.

As a bandleader, she has toured with jazz ensembles at venues and festivals throughout the United States, Europe, Asia and South America, including Spain's JAZZPARLA festival, Alte Feuermache in Mannheim, Germany, Voicingers Jazz Festival in Zory, Poland, the Mahindra Blues Festival in Mumbai, India, and the Goethe Institute in Salvador, Brazil.  Her most recent U.S appearances have been at such NY venues as Jazz at Kitano, the Iridium Jazz Club, Cornelia Street Café, Bar Next Door, Zinc Bar, and 55 Bar with her own group, at Lincoln Center with the Manhattan School of Music Jazz Orchestra, and at Carnegie Hall with Calpulli's Music of Mexico. Outside of performing, Jocelyn works as a voice teacher and educator, giving classes and workshops in voice and vocal jazz.

Currently based in Brooklyn, Jocelyn plays regularly throughout the New York City area showcasing her compositions, and curates and hosts a weekly vocal jazz concert series and jam session. In addition to her original repertoire, she sings, plays percussion and arranges for her Brazilian Jazz project, sings and drums and with the NJ-based Rhythm Monsters West African ensemble, and is a member of the classical Brooklyn Conservatory Chorale.

On her latest Colorado tour, Jocelyn makes her debut in Lafayette at Muse accompanied by local stand outs Bill Kopper on guitar and Bill McCrossen on bass, performing a mix of original compositions, Brazilian and standard jazz repertoire.