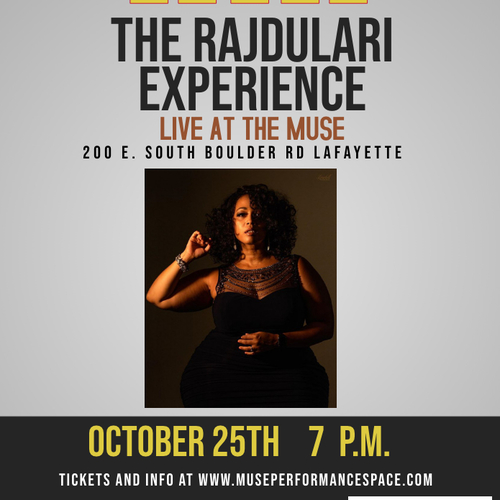 The Rajdulari Experience' features new Colorado resident-Jazz/Soul Vocalist Rajdulari and her amazing band of local musicians. Rajdulari's charming charisma accompanied by her rich, passionate vocals give her an unforgettable presence on stage. An alumni of Berklee College of Music in Boston, Rajdulari’s first album – Honeywine – remained among Amazon.com’s Top 100 Most Downloaded Mp3s for several months & was the #1 album on JazzFM Radio, London’s Premier Jazz station. Her second album – Journey of a Woman – also became the #1 album on R&B outlets in Great Britain, and one of the Top 10 CD’s on the UK album Soul charts. Rajdulari's band will be performing selections from both her first and second albums, as well as sharing new music from her upcoming untitled 3rd album.'

Rajdulari’s buoyant voice vibrates with a clear and honest joyfulness. For her, singing is a healing and soothing activity. Her ability to share uplifting messages of confidence, empowerment, love, and hope - through song - is the most gratifying gift she can exchange.