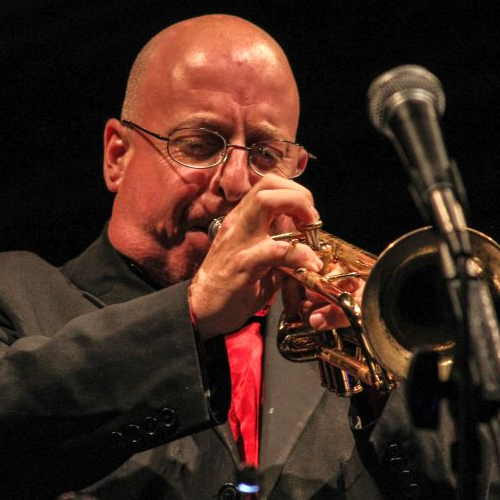 You don't want to miss this! Our Expeditions Plus One series continues with Greg Gisbert as our guest!

Originally from Denver, free-lance trumpeter, Greg Gisbert, has firmly established himself as one of the most sought-after and well-respected artists in jazz today. He has recorded and performed with jazz greats including Buddy Rich, Woody Herman, Clark Terry, Horace Silver, Maynard Ferguson, Bobby Shew, John Fedchock, Harry Connick Jr., Jim McNeely, Toshiko Akiyoshi, and Nancy Wilson. He is one of the founding members of the group Convergence, as well as the founder of the Greg Gisbert Syndicate, both based in Denver. Gisbert is a frequent invited guest with an array of ensembles, including the Maria Schneider and Vanguard Jazz Orchestras, the Smithsonian Jazz Masterworks Orchestra, Carnegie Hall Jazz Band, and Dizzy Gillespie All-Star Big Band. A gifted and generous educator, Gisbert has served on the faculty at the University of Miami, Colorado Conservatory for the Jazz Arts, University of Denver, Manhattan School of Music and Juilliard School of Music, and he is the new Artist Faculty in Residence at the University of Northern Colorado starting in the Fall of 2017.

Expeditions plays fresh arrangements of familiar songs, everything from traditional jazz to folk to Motown, along with some tasty originals. Expeditions has performed at the best venues in Denver, and drawn large and enthusiastic audiences. Co-leaders Pete Lewis and Clare Church are consummate professionals, having shared the stage with Joe Henderson, Dizzy Gillespie, Nancy Wilson, Natalie Cole, and many more.