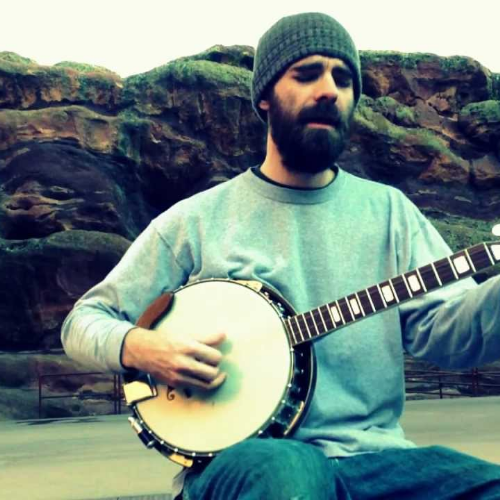 Raised by wolves, taught by squirrels, enemy of the owl- Matthew Wilburn Skinner sings songs of happiness and sorrow. As one-third of the band Tallgrass, he’s certainly done his part to expand the possibilities of the banjo beyond a bluegrass instrument. “I used to just try and play really fast,” he admits. “Which was a challenge, but then I realized you can’t move the soul with that many notes, heh. Just the feet.” He still plays fast sometimes, “I can’t help it, haha, it’s fun,” but it seems to have moved beyond a sport for him somehow. His Delta blues/jazz fingerstyle on the acoustic guitar is also crazy unique, with flourishes of virtuosity in between vocals that will break your heart before lovingly putting it back together again. Starting out in Iowa City more than 15 years ago, he honed his craft as a player and a sound engineer before moving to Fort Collins, Colorado in 2013.

“Matt’s talents are not strictly limited to his time in Tallgrass. His solo performances are a thing of beauty. You are sure to be drawn in by the first soulful moments. Very proficient on both guitar and banjo, Matt enjoys playing and experimenting with open tunings. Drawing from many influences, his songs are honest and soulful, with beautiful depth.” – Little House of Sound
“The best damn singer I never heard!” – Ghost of Abraham Lincoln

Isadora Eden is an independent singer-songwriter / folk musician originally from MA, who has lived and played in Brooklyn, New Orleans, and currently Denver. Her music has been featured in independent film and written about in various music blogs — it has drawn comparisons to artists like Aimee Mann, Nick Drake and Julien Baker.

Her music is often quiet, lyrically focused and intimate, with a melancholy and minimalist sound. It has been described as ‘lonely Sunday morning’ music. Comeherefloyd described the newest EP as “a complex and layered presentation of our ways of dealing with emotions. Thinking internally. Suffering, maybe.”