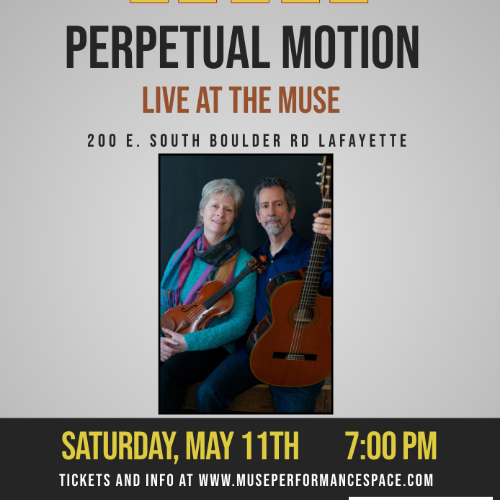 Denver based acoustic duo Perpetual Motion is thrilled to announce the release of “Dance of Two Souls”, a celebration of life, love, and music. They will celebrate Saturday, May 11 with a pre release concert at the Muse Performance Space, 200 E. South Boulder Road in Lafayette. Show starts at 7:30 pm. Tickets are $15.

Their sound is acoustic world fusion, it exists in the spaces between music from everywhere: a vibrant blend of Central and South American folk, progressive jazz, and blues. Tom’s deep beat of classic rock and Josie’s complex thrill of gypsy violin work together to wrap around your core and make you want to move.

In 2008 violinist Josie Quick suffered a debilitating onset of lupus symptoms, which curtailed the group’s creative output. “Dance of Two Souls” is their first studio album of new material since her remission. The music captures the spirit of gratitude and the joy of life. It is music that reflects the duos’ wanderlust, drawing from rhythms and tonal influences of places they've been and those they wish to visit.

During the interim Tom released his debut solo guitar album, winning the Zone Music Reporter award for best acoustic instrumental in 2014. Josie appeared on numerous recordings, most notably Sensitive Chaos “March of the Time Shifters” and “Walking a Beautiful World” and Timothy Wenzel's “Running Away”, “What We Hold Dear”, and “Distant Horseman”.

The pair joined the progressive Americana band Coyote Poets of the Universe, releasing with them a two record set “Strange Lullaby” that spent an amazing 25 weeks on the AMA charts.