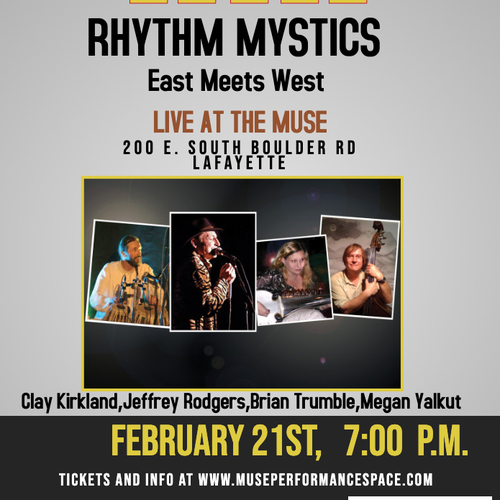 The classical raga style of India plus the blues style of the Mississippi Delta equals transcendence.  Allow yourself to be transported. The Rhythm Mystics will perform as an ensemble. Additionally, each member will perform from their own individual repertoire, taking you on a trip around the world and into the stratosphere.

Megan Yalkut, studied sarod with the man who brought the 25-string instrument to the Western world, Ali Akbar Khan.  Megan designed the website for the Ali Akbar College of Music, founded by Khansahib in San Rafael CA. Megan is a leading belly dance instructor/performer in the Front Range.

Jeffrey Rodgers is one of the premier American players of the tabla drums.  He studied in India with Alla Rakha, who accompanied Ravi Shankar for 35 years.  Jeffrey is a member of that musical family which includes Fazal Qureshi and Zakir Hussain.  Jeffrey is also a master of the hammered dulcimer, playing both in the Appalachian style and the style of the Hindustani classical raga instrument, the santoor.

Brian Trumble, on upright bass, began playing jazz and blues in the New York / New Jersey club scene in the 1980’s, and developed a love for the classical raga style of India.  He toured Europe with an Italian rock band, now lives in Boulder. He also plays the mridangam (drum) to accompany mantra chanting.

Clay Kirkland, harmonica, was awarded Westword’s Best World Beat Album of 1995 for his CD, “Blues, Rock, Raga”, featuring the Royal Musicians of Nepal.  The Colorado Blues Society presented him with their Lifetime Achievement Award for his “…extraordinary contribution to the Colorado Blues Community, embodied by dedication to his craft as a composer, performer, harmonica instrumentalist and teacher whose vision spanned genres and eras of American Music with a mystical brew rooted in the Blues.”